Today I was going to make the post earlier but then I decided to just go and spend some time in Plaza.

I had totally forgotten until I got there that Time Out had recently opened again and darted in the that direction.

I look like a total dork but I was so happy that I just stepped in and paid for my e-card. Turns out that tokens aren’t a thing anymore and I was totally okay with this. I mean, I get to play without having extra weight in my pockets? I’m game, sign me up!

So this Time Out isn’t as big as the one I went to while I was in college but it had a DDR machine. So I dive for it and had a blast dancing to some old BeForU songs. When I bought my e-card I saw this glorious baby…

Oh SNAP! Time Crisis 5 baby! I immediately darted there after my DDR nostalgia. I started playing and dying a lot since the system in this game is a bit more different than the last one.

You see, this game has two pedals now so you can move from cover to cover. IT IS GENIUS. A little hard to get used to but genius. It took me longer to figure out how to change weapon types because I flew through that tutorial.

I also made it my goal to finish this game since it showed me a more detailed progress meter of all six stages. I totally went for it. Took me less than a twenty to get through it and I felt so satisfied to see ‘THE END’ when it was all over. I’d do it again to. I’m planning to go back with my baby sister actually.

I’ll admit that I am not the easiest person to shop with or for. I’ve been meaning to get my hands on more jeans after one pair was bought for me a few months back. I lost a lot of weight in the last year and almost nothing fit me. Roomie got me a pair to get me by since I don’t leave home much.

But I saw these three today… 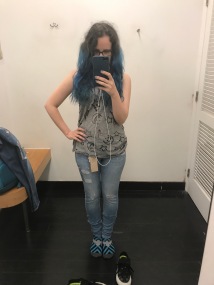 and I totally wanted to get all of them. For the first time in forever I went clothes shopping because I WANTED TO and actually tried stuff on. I love the jeans with the patches on the left but they were full price. I couldn’t afford that. I ended up taking the middle ones, basic black. I still wish I could get the ones on the left though.

I also had lunch with my grandmother on my Mom’s side, first time I see her since my birthday. She paid for my meal and we had a nice chat.

Also met with my sisters, which went great as well. We hunted Pokémon and chatted about games, life, stuff we’re fans about and memes.

Today was more for me than anything else. It’s been a while since I did that.

Michi out! See ya tomorrow!

Quirky gamer with a love of Kpop, Jpop and all things geeky. I love cartoons, video games, books, music and fun in general. View all posts by Michi